I'm a 30-something Frenchwoman who wants to be a librarian when she grows up. In the meantime, I read a lot and draw a lot (everywhere and whenever I can), and I try to write fanfiction. Sometimes I post the results on this blog, hence why the "fanart" and "fanfiction" tags are the ones I use the most :o)

I also tend to make way too much use of those little smiley things. Don't hold that against me.

I love good fiction - long and short - with lots of humour (snarky, heart-warming, epic, gut-wrenching, face-palm-worthy... any kind is good), adventure and the occasional film noir or western parody. I like the smell after rain, opening a book I was waiting to read, my solid-as-a-rock 10-year-long fiancé, the sizzle in my brain when I know I'm writing something worth it, the wrenching in my gut that tells me my favourite character's in serious trouble, chocolate, well-prepared meals, watching stuff on YouTube that I know will probably never run in France and certainly not in original English language...

I have profound dislike for "Die-For-Our-Ship" fangirls, birds (especially "Rats With Wings" pigeons and "Psychopathic Bird Brain" swans), getting up early in the morning when it's cold, terse and cold people, "Cheese Eating Surrender Monkeys" views of my countrymen (except the cheese :D), bad grammar, writer's block... And people who don't spell check what they write with either an automatic spell checker or a dictionary. I mean, how hard it is to get the plural of "parenthesis" right, really?

Fandoms I have written/read in include (but not limited to) the Mummy films (bar the third, which I have trouble considering canon), Hogan's Heroes, the Harry Potter books, Watchmen, the Justice League cartoons, the Discworld series, a rather obscure (except here) French cartoon called Dragon Hunters, Sherlock Holmes, Les Misérables (book and musical), Pirates of the Caribbean and Life on Mars/Ashes to Ashes.

And because this is as good a place as any to put them, and I haven't posted them anywhere on the Internet...

One of the achievements I'm proudest of, fanfiction-wise, is winning four Papa Bear Awards (annual election of the best Hogan's Heroes fanfictions) in 2012. My story was my first foray into the fandom, and I came in late (mid-December), but not only it's the first chaptered fiction I ever completed, but people liked it enough and were kind enough to nominate it and vote for it. Wow.
So Soul Food won... 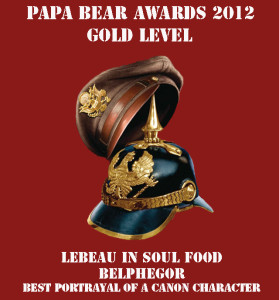 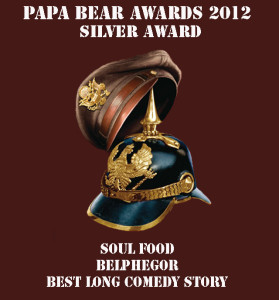 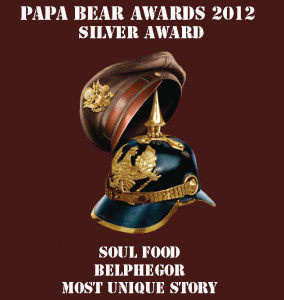 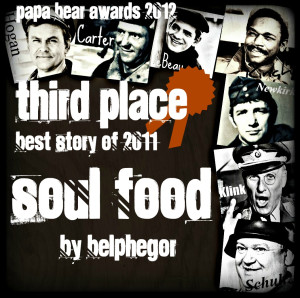 (For some reason the "center" HTML tags don't work. Ah well.) I am very, very proud of these :o)